Sew slow sarah is pretty error prone…A few sewing disaster stories here but also some misses that I think I share with many… Hope these give you a few laughs!

1. Tania culottes. I may have mentioned on the blog previously, and most certainly have on Instagram that I LOVE LOVE LOVE culottes. They’re so wonderful for warm weather, I have quite the collection. Ahead of my trip to Cuba I decided on some more Tania culottes, a long pair in drapey viscose. I should also add that I love the pattern. It was one of the first patterns I sewed without help, and despite the beginner mistakes I made, I still wear those culottes. However, my 2017 Tania culottes turned out to be a disaster for a couple of reasons. 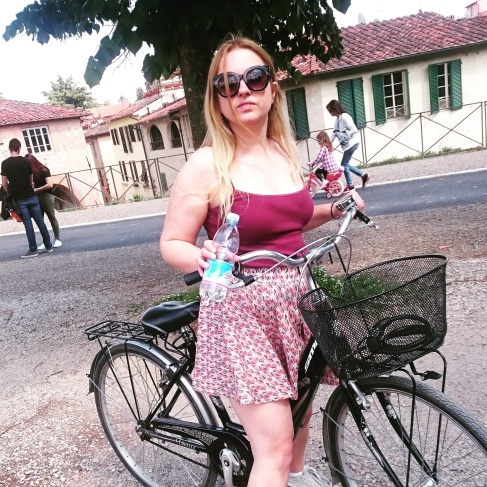 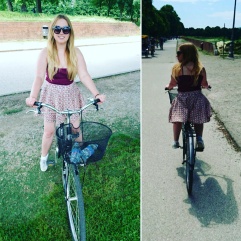 My first pair of Tania culottes, made for a trip to Italy – my next pair will be longer!

My biggest disappointment of 2017 has been my inability to conquer drapey fabrics. I have tried so hard to branch out from lovely, wonderful, stable cotton. I have so much beautiful viscose in my stash. I’d heard of the struggles of drapey fabric, but viscose couldn’t be that bad, could it? Think again… Despite following the advice of many blog posts, including spray starch to stabilise the fabric, and using a rotary cutter over scissor to prevent slipping, my pattern pieces have come out misshapen messes, often smaller than the original piece and so can’t be re-cut. The resulting garments have turned out a bit wobbly, and the Tania culottes are one of the best examples of this – look at that wonky hem! I guess it’s just a case of practice makes perfect, and so I’ll persevere with viscose into 2018… any tips most welcome!

Despite the wonky hemline, I was pretty happy with the culottes – they serve their purpose well – and so on our last night in the town of Trinidad I happily put them on to go for a lovely meal. As I was putting them on, the zip went past the stopper and jammed. Not high enough to come off the top of the zip, but stuck fast enough so that I also couldn’t pull it down. Slightly flustered, I figured it was a problem I could deal with later, and I’d pick myself out of them when I got home. I didn’t quite understand that being stuck in them also meant that I wouldn’t be able to go to the toilet all night. Cue hilarious rushed walk home, and frantic 20minutes of unpicking with a tiny sewing needle (the only vaguely ‘unpicker type’ implement I had with me) whilst desperately holding myself in. Not my finest moment. Those culottes, having only been worn once (for just two hours!), now need a new zip and hemline…but hey, silver, linings, at least I got a few photos in first!

2. Curtain making. We bought our first home this year. Although the new flat is very similar to ones we’d lived in before, we needed a lot of new furniture, as our previous rented flats were furnished by the owner. I decided that it would be fun to make the curtains for our huge bedroom window (you cannot buy curtains big enough for these windows so need to have them custom-made). Fabric shopping was fun, but urgh! Curtain-making is awful. It’s so boring, so precise, and on top of that uses huge, heavy pieces of fabric. There’s so much, endless, pressing, and measuring. It just takes so long. After spending an entire weekend on them (well curtain making and whining) I was still only halfway through each. Shortly afterwards I had my surgery so couldn’t continue with them for a while. In the meantime, we were left with ill-fitting curtains in our bedroom that just didn’t keep the light out. A couple of days after Chrismtas I decided to just get them finished. And that’s when I discovered that because of the incredible width of the fabric, I only needed one curtain for the window….so our window only has one curtain. It functions perfectly well, and so there’s no way I’m wasting another minute on the second one.

3. Sewing photo challenges. I managed about half of MIYMarch, none of MeMadeMay, and one post during bpsewvember. More planning needed before I decide to participate in 2018!

4. Sewing machine and overlocker issues. 2017 should have been exciting. I got a brand new overlocker. But since I got it, I just can’t seem to get the tension right. It’s so loose no matter how much I alter the tension gauges, it’s as though the threads aren’t in the tensions plates (they definitely are). It’s pretty depressing to have it sat there, but not being able to use it. Any advice would be much appreciated.

My sewing machine broke whilst making Ginger jeans. I was using topstitching thread but with regular thread in the bobbin. The machine jammed, pulling the topstitching thread down towards the bobbin, and I couldn’t’ move my jeans at all to try to get to the jam. I pulled as hard as I could, and with a big ‘clunk’, the jeans were freed. I then carried on sewing, but the machine wasn’t forming stitches. After much experimenting, I realised that the bobbin ‘hook’ and the needle drop were out of sync, meaning the thread from the needle wasn’t picking up the bobbin thread – the clunk I’d heard was me forcing the bobbin forward so that it was no longer in sync. It was an expensive lesson as I had to put it in for professional repair, and spend a couple of weeks with no machine.

5. Leaving an unfinished project in the window. In one of my crazy sewing binges I cut out a number of projects at once, thinking it’d save me time. I piled all of the projects up on my sewing table in the bay window in the order that I planned to make them. The last project, which of course I didn’t pick up for a couple of months, was a pair of red culottes in a gorgeous red sateen fabric. When I finally got to it, I unfolded the pieces to find that the parts exposed to the sun had completed faded, and so I was left with some really awkward, irregular colour blocking all down the legs. Needless to say, the culottes are one of many WIPs stashed in my bedroom….

Tomorrow I’ll be back with my sewing hits!