I wish I could say that I always feel motivated to sew. I love sewing and the sub-culture around it, but, as my sewing name suggests, I am pretty slow at getting going and putting those garments together. I probably spend more time looking at other people’s makes, the latest pattern releases and watching vlogs than I do on actual sewing. And so it comes to me as a surprise when things don’t go as smoothly for me as it seems to on those perfectly edited blog posts and vlogs! My frustrating experience last weekend is typical of my sewing adventures and I think goes quite a way to show the energy and enthusiasm really needed to make a (well-fitting) garment when you’re essentially still a beginner. 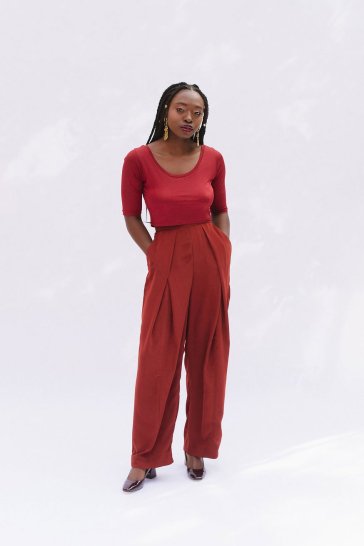 I thought a nice weekend project would be to make up a toile for the Esther pants from Victory Patterns – one of my 2018 make nine. I have some cheap poly crepe for the toile (it’s a lovely forest green colour, so hoping the toile is wearable), and had bought a beautiful raspberry-coloured crepe to make the final garment in. I had a few hours on Saturday afternoon and the whole day on Sunday to dedicate to sewing, and I fully expected to get the toile made in that time.

I spent the Saturday afternoon tracing out my pattern pieces, and on Sunday morning, as I was prepping my fabric for cutting (slippery fabrics are not my favourite when it comes to cutting!), I decided to make some quick adjustments to the pattern pieces in the hope that the toile was more likely to be a wearable one.

I followed some logic in making my few adjustments. They were based on differences in my height and the trouser length. As the front of the trouser is made of two pieces (front, and side front), including the back piece, I adjusted three pieces in total.

I took my measurements that morning – I’d had a few drinks the night before, and just eaten a breakfast composed mostly of sourdough; I tend to bloat quite a bit during the day, and given what I’d eaten and drunk in the past few hours, I figured this measurement was probably me at full bloat. So far, so good.

After comparing my crotch measurement to that of the pattern, and noticing a huge discrepancy (around 3 inches), I increased the depth of the crotch by lengthening across the torso, i.e. right across the pants. There’s a lengthen/shorten line for the crotch on the pants which I used. I added more length onto the crotch than the back as I was aware that most of the length I require is in my front.

The leg length was also way too long for me – I’m only 5″2′, but the pattern is drafted for 5″6 to 5″8. A quick check of the finished outseam measurement compared to my measurement confirmed this, and so I shortened the leg by 4 inches.

I soon realised that the increase in length to the crotch area, right across the pants, would mean that the outseams wouldn’t match. There’s 3/4 inch extra on the front, and that’s quite a lot to try to ease in. So I decided to read up on it.

After consulting my Closet Case online jeans fitting class, and some other blog posts on trouser fitting adjustments, I came to some conclusions about my adjustments:

I was pretty frustrated with myself after spending much of my Sunday morning making these adjustments BEFORE reading up about them, and then now having to unpick these, and do them again. I of course did not make the adjustments on Sunday afternoon as I was feeling too deflated. So I’m planning to do these this weekend (and cut out the slippery fabric!).

My take-aways from this experience are a bit of a mixed bag. I was of course frustrated with myself, but I’ve reminded myself that I am still a beginner. As much as I love to look at new patterns, and join in discussions on social media, this isn’t really a substitute for actual sewing experience. I might know a lot about the patterns out there, but I still have a lot to learn about sewing.

I gained a lot of knowledge about pattern adjustments, and hopefully will be less likely to make the same mistakes again. Garment sewing takes time, and whilst I could have sewn up the pants quickly, I know that they wouldn’t have fit. Putting in this extra time now will save me from an unwearable-toile, and only postpone the inevitable adjustments.

I should also say after all of this, I still want to make these pants, and my experience is not a reflection on Victory Patterns at all. The patterns are great, I’m really drawn in by the centrality of pleats within their designs, and the instructions are really detailed and helpful.

I just wanted to cut into my fabric but here I am nearly a week later and I still have adjustments to make! I cannot wait to make these pants…I’m just going to have to wait a little longer. It’s no wonder I call myself sew slow sarah!